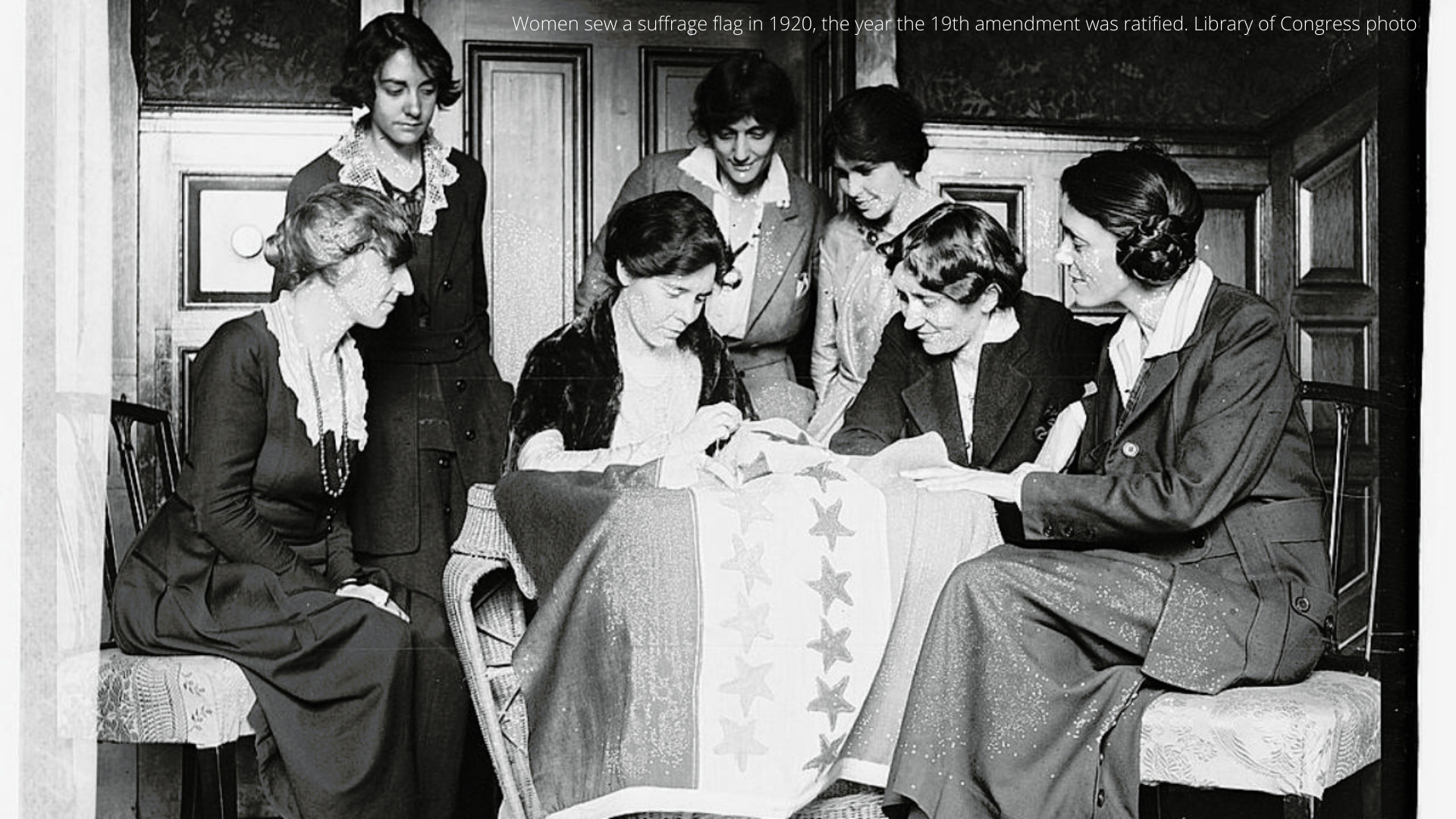 We are thrilled to celebrate the many Vermont women who have made a difference – both locally and beyond. It’s impossible to share every story, but here are a few of our favorites worth noting… 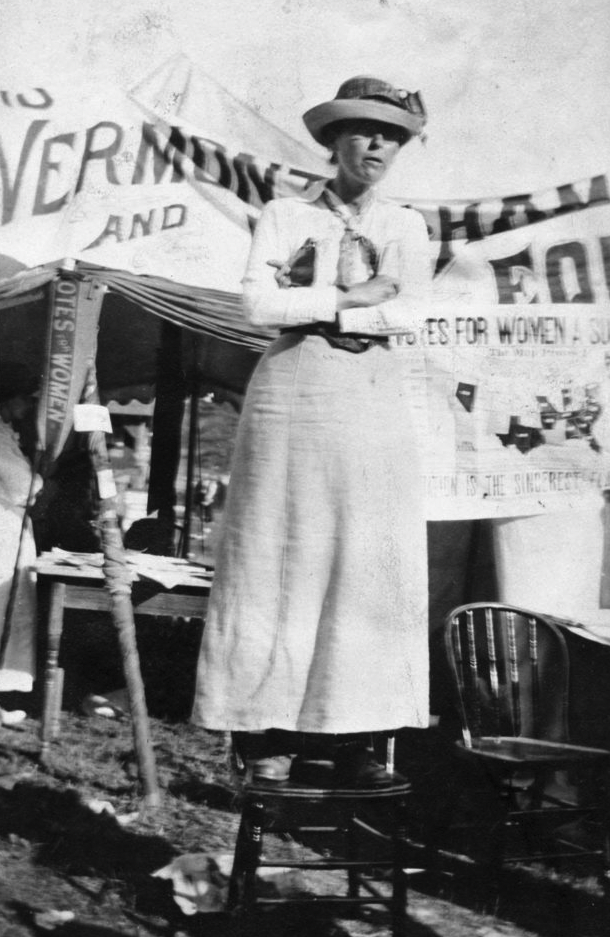 Member of Women’s Suffrage Association of Vermont at the 1912 Vermont State Fair in White River Junction. Courtesy of the Vermont Historical Society.

In Vermont – The Right to VOTE

Key Dates in the Movement for a Woman’s Right to VOTE:

1870 – The Vermont Council of Censors proposes an amendment to the state constitution calling for full suffrage for women. A group of men forms the Vermont Woman Suffrage Association (VWSA) to support the amendment, which unfortunately fails by a vote of 231 to 1 at the constitutional convention.

1880 – The Vermont legislature grants tax-paying women the right to vote in school district meetings, and women are now allowed to hold school offices – and be elected or appointed as school superintendents or town clerks.

1917 – Vermont passes legislation allowing taxpaying women to vote in town meetings. VESA continued to push for full suffrage but it takes another two years for their work to almost come to fruition.

1919 – The Vermont legislature passes a bill that allows women to vote in presidential elections – but Governor Clement refuses to sign the bill, and the House of Representatives upholds his veto.
June 2019 – Congress passes the Nineteenth Amendment. VESA members campaign vigorously to have the legislature consider state ratification, but Governor Clement refuses to call a special session.

1921 – Vermont is forced to ratify the Nineteenth Amendment, and women are finally allowed to vote in ALL elections. Vermont women take immediate advantage of their newfound freedom and in the Gubernatorial election of 1921, Clement’s candidate is defeated in the Republican primary by James Hartness. (Hartness had been the lead voice on a state committee to ratify the Nineteenth Amendment. According to estimates, Hartness captured about 75 percent of the more than 10,000 votes cast by women voters). A local newspaper reports that “Quite a number of the female voters of the town cast their votes as if they had done so for years.”

1921 – Edna L. Beard wins a seat in the State House of Representatives, becoming the first female member ever in Vermont’s legislature. In 1922, she makes history again by being the first woman to win a seat in the state Senate.
Although the early 1920’s brought in monumental rights for the women’s suffrage movement, let’s not forget that BIPOC women and men were still prevented from voting. Even though many BIPOC women were active in advocating for the women’s suffrage movement, they could still not vote.

2015 – The Institute for Women’s Policy Research, a think tank, releases a report on the status of Vermont women, examining the well-being of women based on different metrics. Unfortunately, this organization finds:
• No women of color were elected to statewide executive office by 2015.
• 43 percent of the state’s women with full-time work could not make what they needed for “basic living expenses”, and are not expected to achieve equal pay until 2048, based on current trends at that time.
• Vermont women typically get half of what men do in terms of annual social security benefits (with women receiving approximately only $10,000).
BUT – they also find that Vermont has a number of things to be proud of when it comes to gender equality:
• Women comprise nearly 40 percent of individuals in the state’s General Assembly.
• Women represent half of the presidents in public university and college settings.
• Women make up 60 percent of Vermont’s Supreme Court Justices.

2017 – In August, Governor Phil Scott formally proclaimed “Women’s Equality Day” in the Ceremonial Office in the Vermont State House.
Today, according to Vermont Commission on women. Vermont women still face inequities in earnings, employment, safety, leadership, and many other areas. They earn just 84% of what men in Vermont earn, are more likely to live in poverty, more likely to be unable to meet their basic financial needs, and more likely to be single parents. Women in Vermont continue to experience disproportionate domestic and sexual violence, and are experiencing sexual harassment at rates estimated as high as 70-80%.
Although great strides have been made, the fight for what’s right continues!

For more information about the Vermont Suffragettes, check out this cool audio entitled, “Women Get the Vote, 1920” produced by Woodsmoke Productions and Vermont Historical Society:

Celebrating Local Leaders / Past and Present: 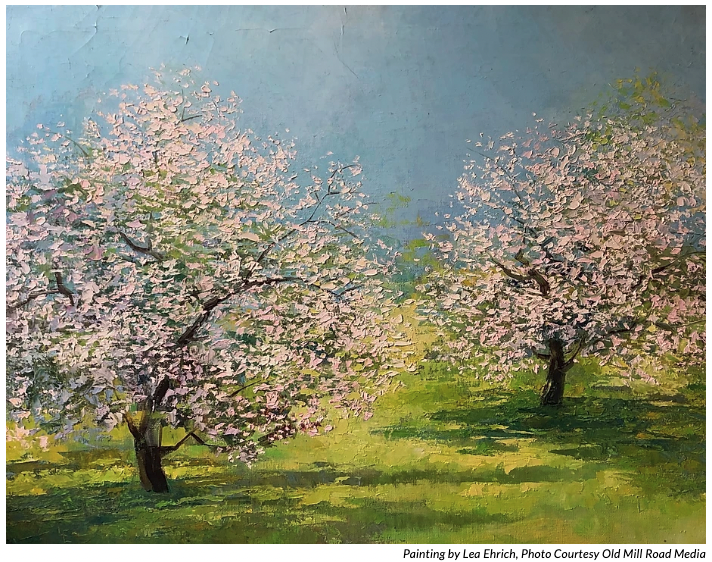 Like so many women of the mid-20th Century, Lea Ehrich was much more complex than she was allowed to demonstrate publicly. Despite being a member of the Southern Vermont Arts Center for 52 years (1945-1997), best friends with Kacy Hughes (George Hughes’ wife), and a respected fine artist (particularly adept at capturing the nuances of nature), Lea had not been publically recognized as part of the famed Arlington Artists’ Colony – until July 2019.  Read more about Lea’s life from this article in Vermont Magazine. 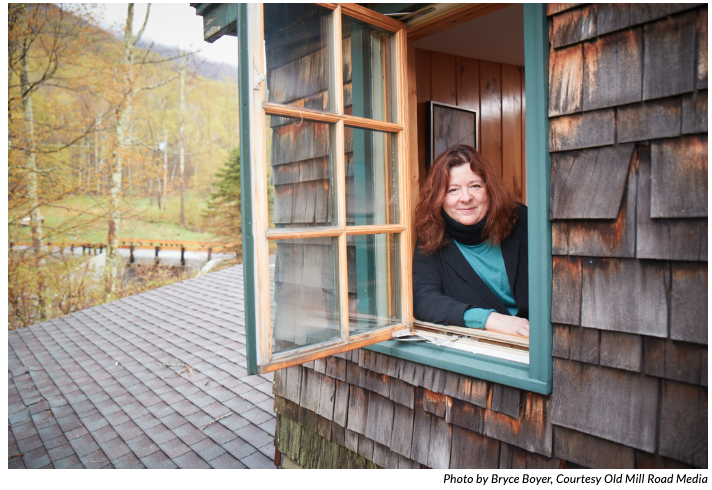 Vermont-based playwright Theresa Rebeck has had four shows on Broadway. TV and Film stars ranging from Katie Holmes to Alan Rickman have championed her work. She has been nominated for the Pulitzer Prize and named by Newsweek as one of their “150 Fearless Women in the World.”  She is a regular fixture at the Dorset Theatre Festival.

We asked Theresa for her thoughts on Women’s History Month.  She replied:

“If you ask me, it ought to be ‘Women’s History SIX Months’, since we are half of the population. Having said that, I think anything that focuses – for even a short time – on the accomplishments of women, their courage, and their trials, is a good thing. Go read a book by a woman.  Or view a piece of art by a woman.  Call your mother. Think about men and women as partners on this good earth.”

To listen to a full-length interview with Theresa Rebeck, go to vtvoices.com 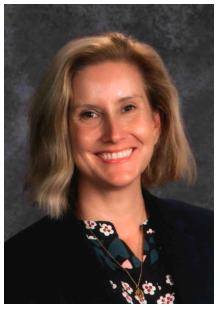 Dr. Mikheev, started at Maple Street School, July 19th and came from Sewickley Academy in Pennsylvania, where she was the Head of Lower School.   She was no stranger to the Northshire area, having spent many family vacations here for more than 40 years, skiing, swimming, and enjoying all that the area the Northshire has to offer.

Mikheev’s doctoral work at Columbia’s Teachers College in school psychology led her to practice at the Convent of the Sacred Heart, Birch Walthen Lenox School, and Mandell School in New York City, where she worked with students from pre-school through 12th grade. “In my work as a school counselor, I often reflected on how schools could integrate psychological principles into their daily workings to make life better for students, teachers and families,” Mikheev said. “This is when I realized that my perspective on students and their learning could inform my strong interest in school leadership.”

In her headmaster’s address, she writes:

As a parent and an educator, I was drawn to Maple Street because the students’ daily experiences at school so clearly reflect the mission and was quoted “ Maple Street School is a joyful academic community that cultivates personal and social responsibility. We nurture intellectual and creative growth through an engaging curriculum. Our culture of respect inspires confident learners.”

As a private school with a proud public purpose, at Maple Street, we take our responsibility for fostering respect among our community members very seriously. We celebrate diversity and welcome different perspectives. As a small, tight-knit community, every student here is known and loved. By cultivating curiosity, celebrating learning and creativity, and developing lifelong constructive habits of mind, Maple Street lives up to the dreams of our founders. Please come and visit us; our dream for children just may align closely with yours. 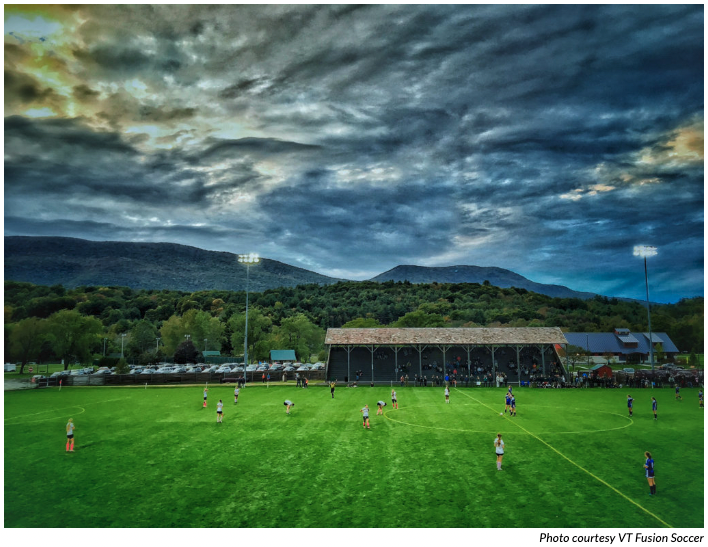 VT Fusion Soccer Club offers both travel and local team opportunities for female players living in Southern Vermont, as well as Eastern New York. The club strives to offer multiple teams at all age groups, which allows players to receive targeted training and compete in contests at their current skill level. VT Fusion soccer teams compete in the greater Albany area and throughout Vermont and New Hampshire. Sarah Perry is the President of VT Fusion Soccer Club. Sarah brings to the board a level of community-driven leadership that expands beyond soccer. As a mentor and coach, Sarah has spent the better half of her life uplifting the youth in many Vermont communities. She has served on several non-profit committees giving her the experience necessary to lead VT Fusion.

Manchester, VT will be the host of the WPSL Regional International Combine, taking place this coming July 19 – 21.  Andy Vera, with the WPSL is quoted as saying “Our host club, VT Fusion Soccer will be providing access to some of the most beautiful and well-tended facilities in the country, including Applejack Stadium (applejackstadium.com) which is owned and operated by the Town of Manchester, Vermont”

GIRLS ON THE RUN

Girls on the Run Vermont is an independent council of Girls on the Run International. In 1999, When Girls on the Run Vermont was started by Nancy Heydinger, it was with only 15 girls in Windham County. They now serve an annual 2,700 participants at more than 170 sites throughout the state of Vermont. The only program of its kind, its’ focus is on the important connection between mind and body with research-based lessons and accessible physical activity instilling confidence and nurturing care and compassion in every girl.

At Girls on the Run, core values guide their way and they stand firm in their long-standing commitment to building a world where every person can know and activate their limitless potential. They value the dignity and humanity of all people and are dedicated to being an inclusive, diverse, equitable and accessible (IDEA) organization.

Girls on the Run will be holding their annual 5K run in Manchester, VT on June 11, 2022. They are still looking for volunteers and assistance. Find out how you can help and more about the organization here https://gotrvt.org/Manchester-5K 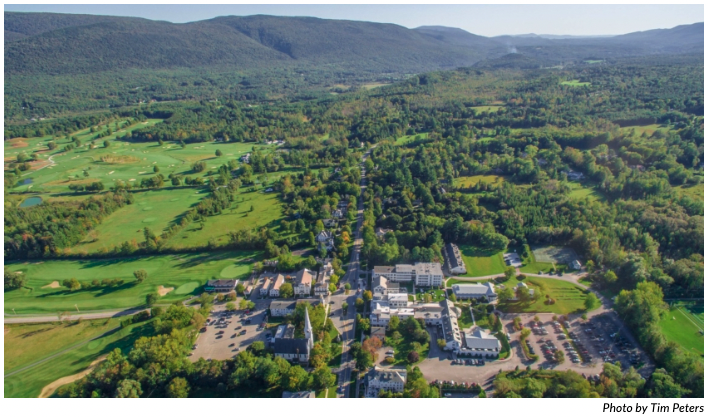 The Vermont Commission on Women

The Vermont Commission on Women (VCW) is an independent non-partisan state government commission.  The purpose of the VCW is to advance rights and opportunities for women and girls in Vermont.

The VCW is one of the oldest commissions in continuous operation in the United States.  In 2002 the VCW was put into Vermont statute and renamed the Vermont Commission on Women.  The rich history of accomplishments reflects the evolution of the status of women in society and the hard work and dedication of hundreds of Vermonters, Commissioners, staff, Advisors and community partners.  Learn more here: www.women.vermont.gov.

The AAUW is committed to achieving quality education for women and girls and to promoting equity for women and girls in all walks of life. To achieve these goals, they are active in communities and lobby Members of Congress and the Vermont Legislature on issues related to education and equity for women. AAUW branches in Vermont: Bennington, Brattleboro, and Middlebury. Find out more here: www.bennington-vt.aauw.net

The League of Women Voters (founded 1920) is a non-partisan multi-issue organization that encourages informed and active participation of citizens in government, promotes political responsibility through informed and active participation in government, works to increase understanding of major public policy issues, seeks to influence public policy through education and advocacy. The League registers voters, sponsors candidate debates, publishes voter’s guides and public policy research, and holds conferences on key issues. League members themselves choose which public policy issues will be target for study and action. There are three regional chapters in Vermont. https://lwvofvt.org/