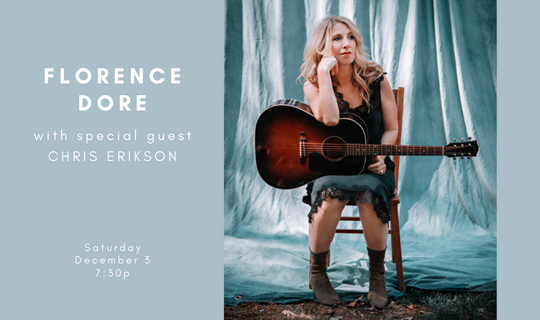 Florence Dore is a Nashville-born, North Carolina-based independent musical artist putting out a new record, Highways and Rocketships. The road from her first LP Perfect City (Slewfoot 2001) to Highways and Rocketships has been anything but straight—and that’s not even counting the pandemic delays. She has spent a lot of that time between then and now riding around on Steve Earle’s tour bus, catching up with her Dukes-drumming husband Will Rigby. She also wrote a book, put on a conference at the Rock and Roll Hall of Fame, and took a seat on the board at the Bob Dylan Institute. Somewhere along the way she and Will had a kid too. Back in 1994, her song “Christmas” was included on a 1994 Geffen compilation, Just Say Noel, while Florence was making her way in the music scenes of Boston, New York, San Francisco, and Cleveland. Florence and her ace band— Will, Peter Holsapple (the dB’s; Steve Earle & the Dukes), Mark Spencer (Son Volt), and Jeremy Chatzky (Bruce Springsteen)—recorded Highways and Rocketships with Don Dixon and Mitch Easter (REM, etc.), and the record came out JUNE 10, 2022.