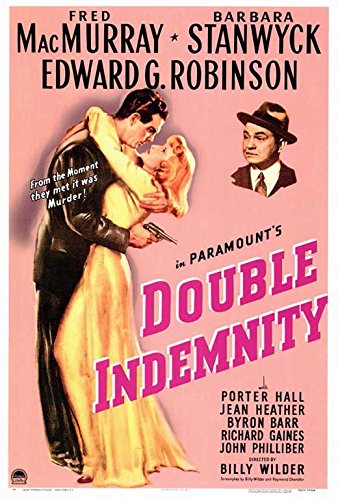 The Year of Mystery continues with a double, double feature weekend of Noir Films at BPAC/Oldcastle Theatre February 8th and 9th.
The Film Noir genre dealt with tough characters, crime and a cynicism which helped legitimize film as an art form in the 1930s and 40s. Four of the finest examples of this much beloved genre will be shown beginning with 1947’s “Out of the Past” starring Robert Mitchum, Jane Greer and a very young Kirk Douglas at 2 p.m. on Saturday February 8th. Film historians consider “Out of the Past” a superb example of the genre due to its complex storyline, dark cinematography, and classic femme fatale. A hardboiled melodrama based on a novel by Geoffrey Holmes and directed by Jacques Tourneur is a the story of a man who tries to break from his past and his weakness and start over again in a new town with a new job and a new girl. The movie made Mitchum a Noir star with weary eyes and a laconic voice whose very presence as a violent man wrapped in indifference. Critic Roget Ebert called it, “the finest cigarette- smoking movie of all time.” Rhonda Fleming is also in the movie in a supporting role.
At 7 p.m. on February 8th Billy Wilder’s classic “Double Indemnity” will be shown. Co-written by Wilder and Raymond Chandler and based on a novel by James M. Cain, “Double Indemnity” stars Fred MacMurray as an insurance salesman and Barbara Stanwyck as a provocative housewife who wishes her husband were dead, and Edward G. Robinson as a claims adjuster whose job is to find phony claims. Praised by critics the movie was nominated for seven Academy Awards. It is often cited as setting the standard for film noir. Cain based his novella on a 1927 murder case perpetrated by a married Queens, New York woman and her lover whose trial he attended while working as a journalist.
Already a major star, Ms. Stanwyck was afraid, after years of playing heroines, to go to playing an out- and- out killer. Director Wilder asked her, “Well, are you a mouse or an actress?” Ms. Stanwyck answered, “Well, I hope I’m an actress.” Wilder replied, “Then do the part.” Ms. Stanwyck did and was eternally grateful.
MacMurray was accustomed to playing “happy go lucky guys” in light comedies and when Wilder approached him said, “You’re making the mistake of your life.” But, “I never dreamed I was making the best picture of my life,” MacMurray said years later. The actor appeared two decades later in Billy Wilder’s “The Apartment” another film classic.
After seeing the movie Alfred Hitchcock wrote to the director saying, “The two most important words in motion pictures are ‘Billy’ and ‘Wilder’.”
Sunday at two p.m. Orson Welles’ 1958 masterpiece “Touch of Evil” will be screened. It stars Charlton Heston, Janet Leigh, Marlene Dietrich and Welles himself. Welles wrote the screenplay based on a bad Whit Masterson novel and directed. There is a story, perhaps apocryphal, that the producer, Albert Zugsmith, very much wanted Welles to direct a movie for him. Welles, wanting to prove he could direct a great film out of a bad script, asked for the worst script Zugsmith had. Welles rewrote the script extensively.
The film opens in a long tracking shot lasting three minutes and twenty seconds that is widely considered as one of the greatest long take in cinema history. The movie, like so many of the director’s works, was taken away from him by the studio but much of Welles work was restored in a later version that received awards from the New York Film Critics Circle and the Los Angeles Film Critics Association.
Set in a border town on the US-Mexico border, it begins with a time bomb planted in a car. Heston, as Mike Vargas a drug enforcement officer, and Leigh, his wife, pass the car several times on foot. Shortly after crossing the border the bomb explodes. Welles plays a police captain and Dietrich is a brothel owner. Welles weaves complex character studies with a complex plot that keeps audiences on the edge of their seats.
The weekend concludes with another James M. Cain classic “The Postman Always Rings Twice” featuring John Garfield and Lana Turner, directed by Tay Garnett. Garfield is an amiable drifter who hitches a ride with a man we later discover is the local district attorney. Garfield is dropped off at a rural diner/service station and gets a job there. The diner is owned by stodgy Nick (Played by Cecil Kellaway) and his beautiful, much younger wife( Lana Turner). Garfield and Turner begin an affair and…well saying too much more would ruin the fun for those seeing the movie for the first time. Also in the film are Hume Cronyn and Leon Ames. Ms. Turner said it was her favorite role and it garnered her the best reviews of her career. According to Rotten Tomatoes 95% of critics gave the film a positive rating.
Tickets are $8.00 or $25.00 for all four movies or for bringing three friends to one of the films. For further information visit the Oldcastle website or call 802-447-0564.