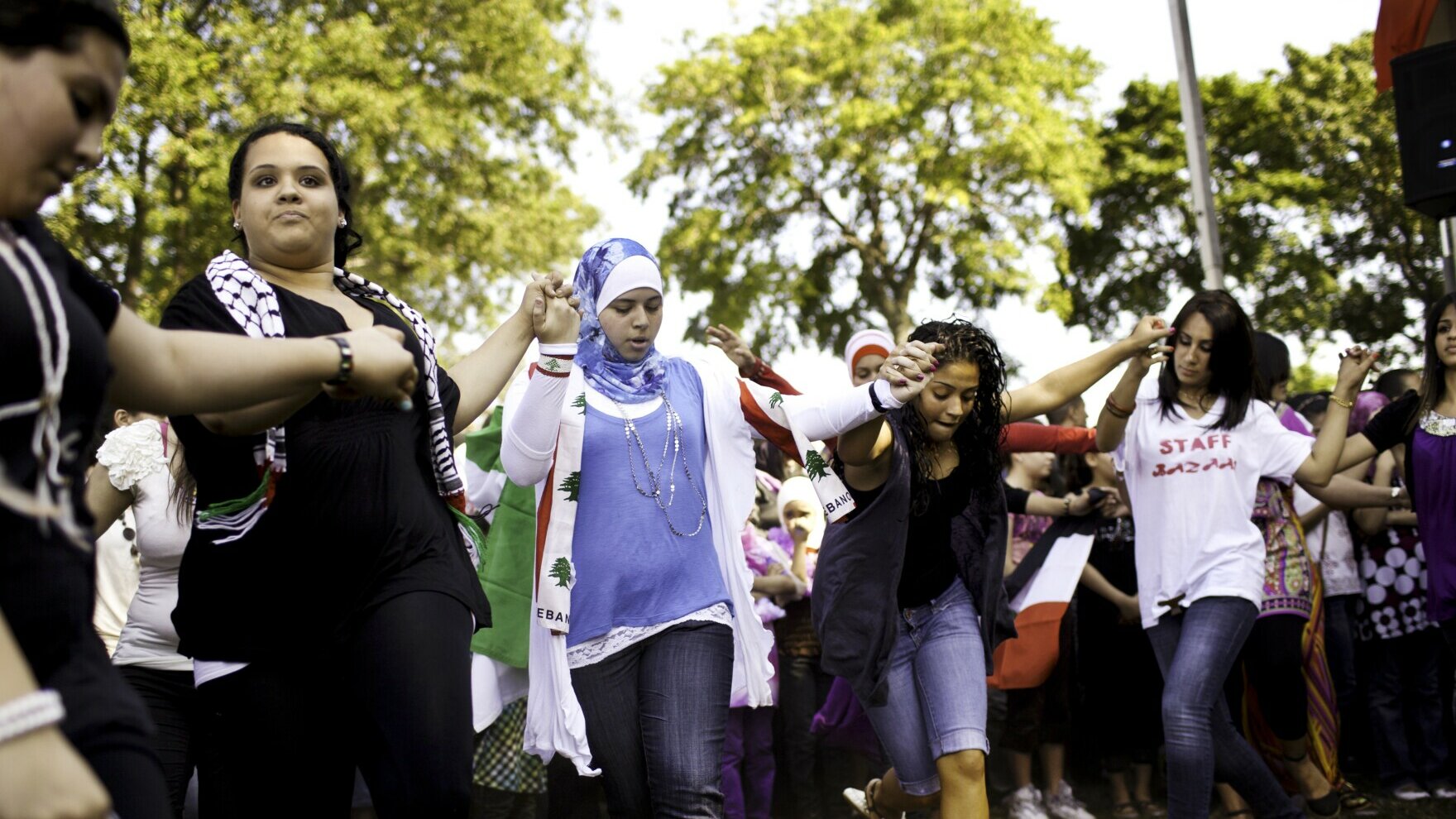 Celebrating Arab American Heritage Month begins by understanding that the term “Arab” is a cultural and linguistic term.  “Arab” is not a race, nor a religion. It refers to people who speak Arabic as their first language and Arabs are united by culture and history.

The initiative for the official national designation of the month of April as Arab American Heritage Month was launched in 2017.  It initially began with support from a just few states, but each year observance has grown as more states officially recognize April as Arab American Heritage Month. On a national level, legislation is still pending in the U.S. House and Senate.  But, on April 19, 2021, the first recognition on a federal level was issued, as President Joe Biden published a White House letter recognizing the month.

So where does Vermont fit in all of this?

Since the 1980s, the number of Vermonters who claim an Arab ancestry has more than doubled and continues to grow. The largest number of new Arabs to Vermont emigrated from Lebanon, Somalia, Iraq, and Sudan. But the presence of Arab Americans in Vermont goes back much further than the 1980s.  Vermont has seen the immigration of Arabs since the late 1800’s, as discovered through inscriptions on tombstones throughout the State. It is difficult to measure the migration of Arabs to Vermont during the late 19th and early 20th centuries, since many families changed their names when they arrived in the U.S., to hide where they came from and avoid discrimination.

A study on the tracing of Lebanese Migration to the Green Mountains between 1890-1940 by Amy E. Rowe, brought her to the Burlington and Barre areas where she discovered a high volume of Arabic found on tombstones. Photo and caption by Amy E. Rowe: Simon gravestone, St. Joseph’s Cemetery, Burlington, Vermont. The Arabic writing under John Simon indicates that he was born in Hadchit, Lebanon, in 1874 and died in 1930; for Mary, the Arabic says exactly what is written in English. 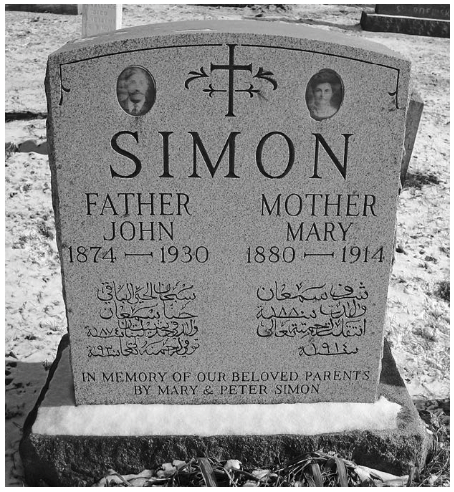 So how did Arabs end up living in Vermont?

Interestingly, a man from Georgia, Vermont, named Daniel Bliss founded a university in Beirut in 1870, which was originally called the Syrian Protestant College. Although founded as a secular college, today it is known as the American University of Beirut (AUB) and is a private, independent, non-secular, coeducational institution that bases its educational philosophy, standards, and practices on the American liberal arts model of higher education.

Another connecting factor is the common landscape. There is an association made between the mountains of Lebanon and the mountains of Vermont. It is thought that many of the immigrants from Lebanon had Vermont suggested to them as a destination because of the geographical similarities.

In March 2022, Governor Phil Scott proclaimed April as “Arab American Heritage Month” in the State of Vermont. This is great news, but as noted earlier, Vermont is not the first, nor the last State to proclaim this. Vermont and its residents, continue to make great strides in recognizing the value and contributions of Arab Americans in our communities, but there is still work to be done.  Working together with open hearts and minds, creating equal opportunities for all, engaging in open dialogue, continued education, and addressing racist actions and behaviors, no matter how uncomfortable it makes us, will allow progress and positive change. 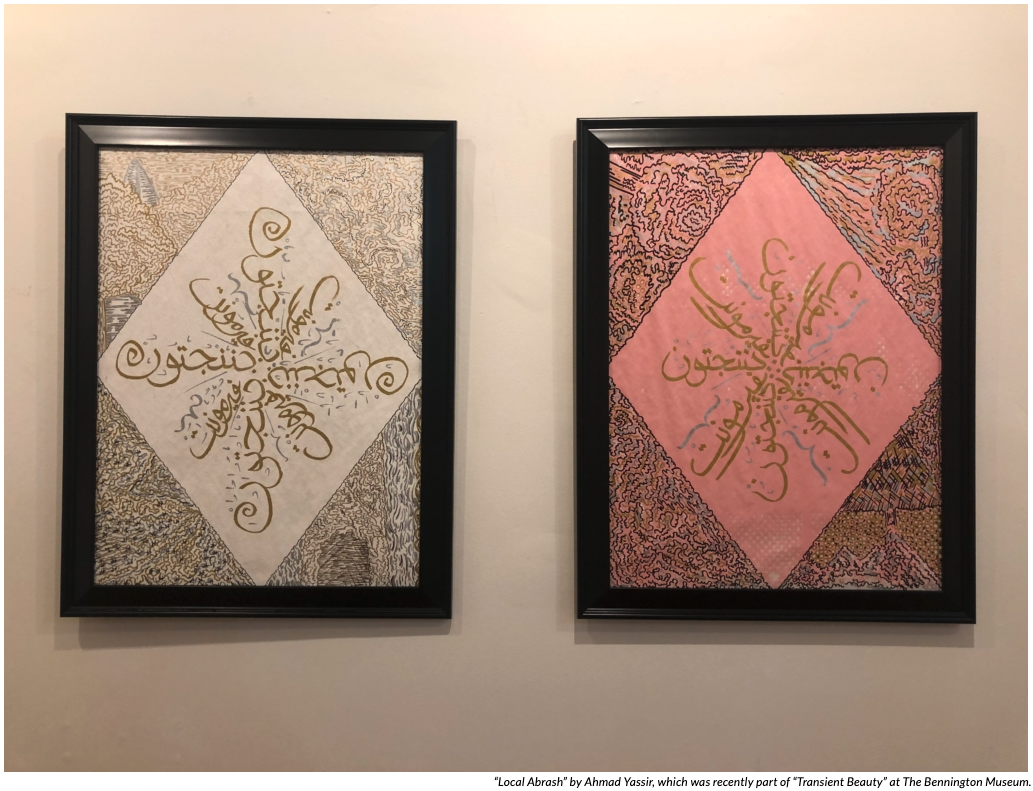 Meet Ahmad Yassir, Digital Advertising & Marketing Specialist at Vermont News & Media, parent company for the Brattleboro Reformer, Bennington Banner and Manchester Journal. In addition to his current work at the newspapers, Ahmad is an international artist, educator, and social practitioner, who draws inspiration from the social and political conflicts that have been associated with his growth, living environments, and educational experiences.

Ahmad was born in Tripoli in northern Lebanon.  He subsequently found independence in Beirut and studied at the United World College in Mostar, Bosnia and Herzegovina before finding his way to Bennington, VT. He earned his Bachelor of Arts at Bennington College, where he studied Visual Arts and Public Policy Analysis. While at Bennington, he also developed his international teaching portfolio with the support of Ahliah International school in Beirut, Lebanon; SSMT (Syrian Smile Makers Team) in Southern Turkey; Abaarso School of Science and Technology in Hargeisa, Somaliland; and in the U.S. with the Southwest Vermont Supervisory Union. 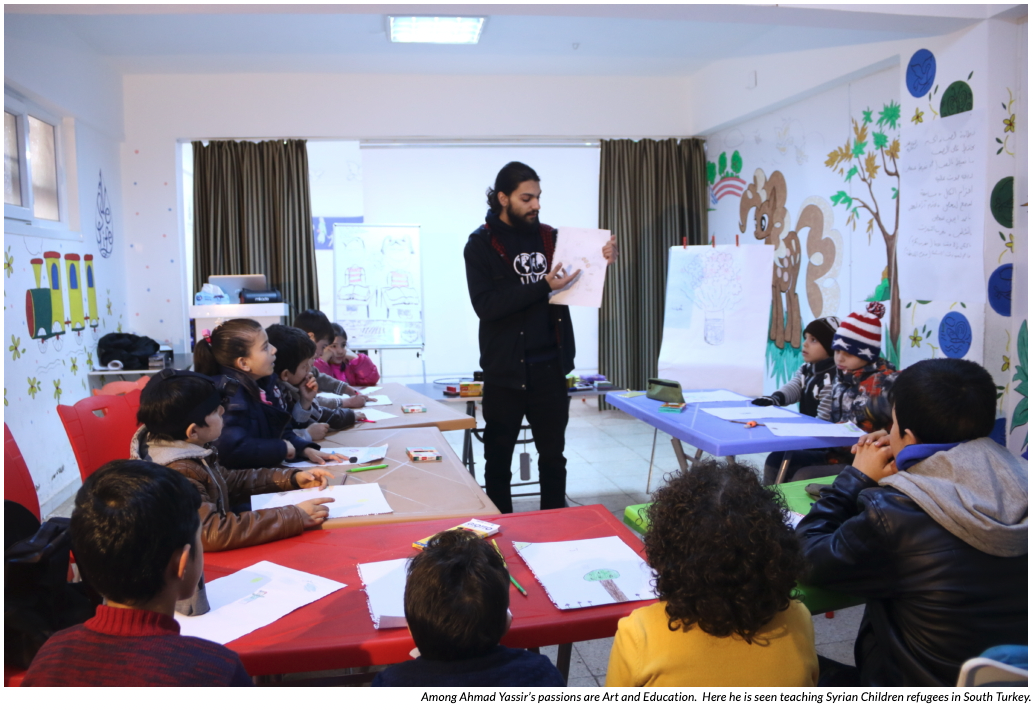 At a young age, Ahmad was inspired by animation and cartoons. He filled sketchbooks with figure drawings and caricatures, inspired by the programs he had seen. He received multiple awards in visual arts, both regionally and nationally. He was ranked second in Arabic Calligraphy by UNESCO in 2010. At Bennington College, Ahmad began to rigorously study a breadth of art-making practices, as well as a broad exploration of Islamic art history and contemporary art movement.  Ahmad’s artwork has been exhibited in Lebanon, Bosnia and Herzegovina, and The United States. His work was most recently featured in the “Transient Beauty” show at the Bennington Museum.

Ahmad’s experiences as a student and teacher in international institutions have influenced his passion for instructional design and curriculum development.  He creates interactive, discussion-based classes that combine epistemology, conflict resolution, global politics, peacebuilding, social practice, visual media, and creativity that aid in student advancement. His pedagogy is derived from the idea that all students have different approaches to learning and thus require different means of communication. By developing courses that focus on students’ personal passions and interests, Ahmad hopes to advise and motivate students to be confident in their skills as creative thinkers and leaders. 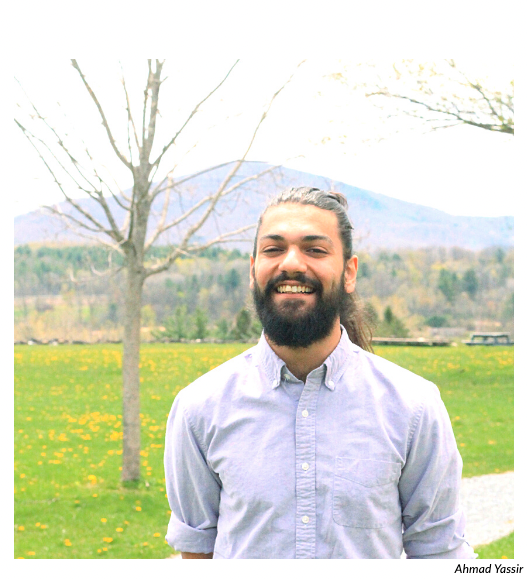 Ahmad summarizes, “Vermont reminds me a lot of home: the sense of community, landscape, and love for holding tight to traditions. Being able to walk down the streets and getting met with ‘How’s it going?’ or just a wave saying, ‘Hello’, made me more comfortable and passionate about giving back to the community. I haven’t felt this type of recognition since I was surrounded by people from my own community. Being a social justice and community-oriented person, I had a huge urge to stick around and contribute more to this beautiful place – through education, the arts, and helping small businesses with their outreach work.”

The Arava Institute uses environmental justice as a platform to help bring people together to overcome cultural and political differences. Rabbi Michael Cohen splits his time between Southern Vermont and Israel, where he teaches classes at the institute. 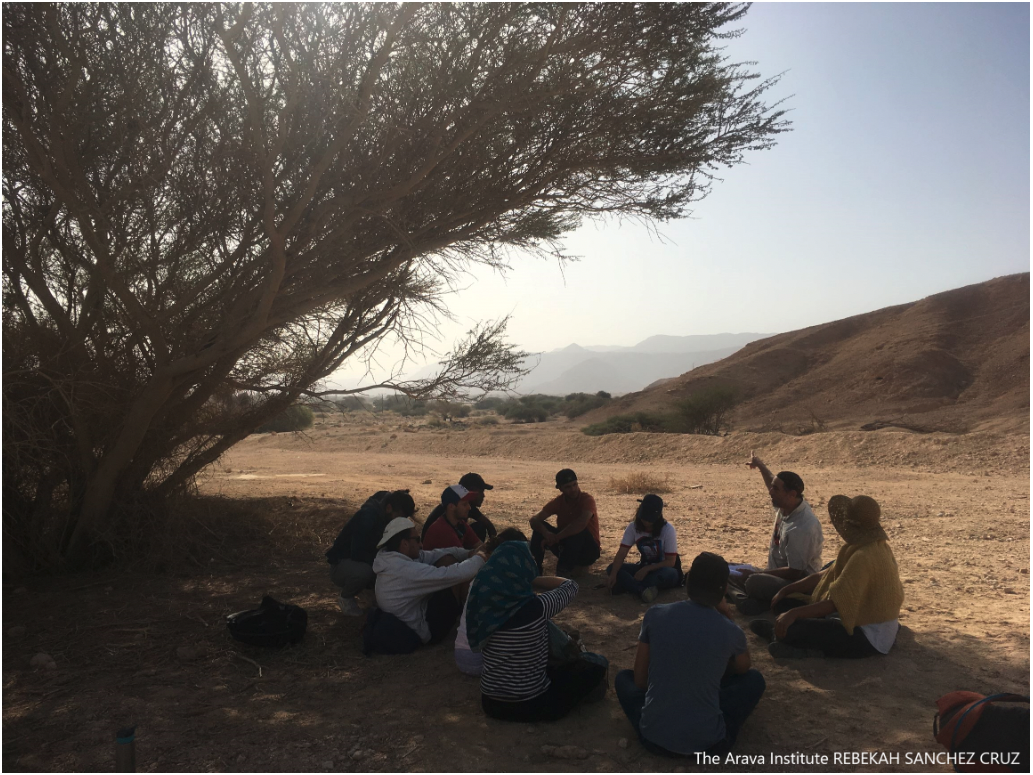 Rabbi Cohen has been a Manchester community member for over thirty years and now serves as Rabbi Emeritus at Manchester’s Israel Congregation. He also teaches conflict resolution classes at Bennington College. At the Arava Institute, he is a member of an international academic faculty, which is comprised of climate scientists and conflict resolution experts, who help to educate future generations of environmental activists, consultants, diplomats, and advocates. He goes out of his way to spread the word, offering support to local students from Vermont schools, colleges, and universities who apply to Arava’s environmental education program.

Alumni of the Arava Institute include students from University of Vermont, Middlebury College, Green Mountain College, and Bennington College, as well as 4 students from Burr & Burton Academy in Manchester, Vermont. Thanks to Rabbi Cohen’s tireless recruitment efforts in Vermont, University of Vermont has sent more students to The Arava Institute than any other university in the United States. Rabbi Cohen also brings Arava alumni back to Burr & Burton Academy, where they teach conflict resolution classes and share stories of their experiences at the Arava Institute. By bringing the Arava alumni to Vermont, Rabbi Cohen has created a full circle of international education, in which Arava graduates bring the lessons they learned from the program in Israel to the Vermont community where Rabbi Cohen’s congregation is based.

The Arava Institute is the premier environmental studies program in the Middle East, preparing future Arab and Jewish leaders to cooperatively solve the region’s environmental challenges. Together, faculty and students are advancing a critical common cause — a sustainable future for the region’s human and natural resources. The institute brings students of different religious backgrounds, nationalities, and ethnicities together in the same classroom. By bringing them together, the institute aims to break down the cultural stigmas that prevent multi-national collaborative efforts on rapidly escalating environmental issues. Rabbi Cohen believes that working to overcome challenges related to climate change can serve as a bridge to help overcome cultural and political differences.

CELEBRATING DIVERSITY IN THE ARTS

The Southern Vermont Arts Center (SVAC) is excited to feature the exhibition, “Many Americas”, in its Wilson Museum from late August through November 2022. “Many Americas” is an unflinching exploration of race and culture, while seeking out how an American experience can be shaped by divergent histories. The exhibition will feature close to two dozen works by 20 diverse artists, complemented by in-gallery interpretation, public programming, and performances that encourage civic discourse.

The organization’s goal is to build a community and network that promotes, supports, and affirms People of Color in a way that helps them succeed personally and professionally. Our network is built from within (“for us, by us”) and focuses on young people of color, professionals of color, businesses, and entrepreneurs of color, because prosperity starts with opportunities to climb the economic ladder, and a prosperous BIPOC community is a good thing for ALL of Vermont!
vtpoc.net

A non-partisan, volunteer-based organization dedicated to strengthening the Arab American community.  The organization’s mission is both comprehensive and inclusive, empowering the community through social, cultural, professional, and political initiatives.
naaponline.org

Founded in 2013, the Root Social Justice Centers’ mission is to support BIPOC-led organizing, in support of growing a movement for racial justice.  It’s a Vermont-based nonprofit organization focused on racial justice organizing, community advocacy, and relationship-building through programming, actions, and local initiatives.

To learn more, to make a donation, or get involved, please go to:
therootsjc.org